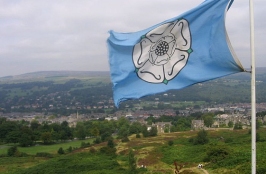 On 23rd June the UK will be going to the polls to vote on whether to leave the EU or remain. However, in the absence of any clear facts and nothing but contradictions from both camps, I have considered all options and decided to campaign to leave not just the EU but the UK as well and claim independence for Yorkshire!

I’m hoping that Sean Bean will be the face of the Ee By Gum Referendum leave campaign, or Yexit as it is been dubbed (by me). Nobody is campaigning to stay. Being the largest county in the land we have everything we need to be self-sufficient – thriving cities with commerce, hundreds of acres of farm land and enough rainfall to ensure we’ll never experience a drought. Plus we have the extensive Yorkshire Tea plantations over Heckmondwike way so we’ll never die of thirst.

OK, so our industries of steel and coal may have been eroded but we are entrepreneurial people who have turned our talents to other things such as stripping and flugelhorn playing. We also boast the country’s greatest sports people and events: Yorkshire athletes such as Nicola Adams, the Brownlee brothers, Jessica Ennis-Hill and Ed Clancy propelled Team GB to its highest ranking ever on the medals table at the London 2012 Olympics; Danny Willett from Rotherham won the US Masters this year; and the Grand Depart and Tour de Yorkshire united the county in bicycle re-spraying and bunting hanging.

We’ll never want for culture either with the Hepworth Gallery, Yorkshire Sculpture Park and Royal Armouries right here and we have world class musicians such as the Arctic Monkeys, Kaiser Chiefs and Black Lace. Want paintings of gay men in swimming pools? We have David Hockney. Want half a cow suspended in formaldehyde? We have Damien Hirst.

The rest of the UK is obviously reluctant to see us leave. Yorkshire delicacies such as Wensleydale cheese, curd tarts and Pontefract cakes will be subject to price increases outside the Yorkie-zone as export taxes are levied, and royalties will need to be paid by anyone making Yorkshire puddings and other Protected Origin Status recipes outside of the county.

We are, however, a good natured and fair minded folk though and won’t be controlling our borders too rigorously; we understand that many non-Yorkshire citizens will want to flit to God’s Own County upon its independence and we welcome that. Unless you’re from the wrong side of t’Pennines of course.

So use your vote well on Thursday and say “si thee UK” and “ay up t’independent state o’ Yorkshire!”